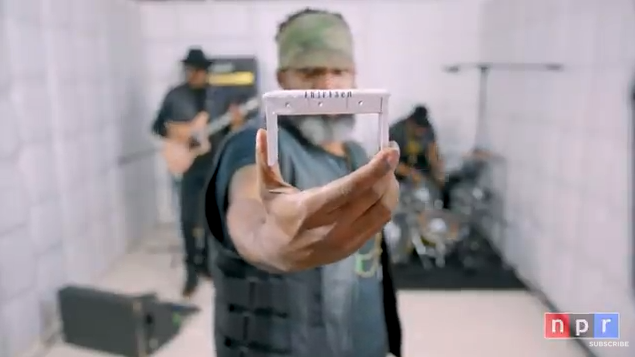 Abby O’Neill | January 18, 2021 TH1RT3EN, an irreverent and inflammatory new trio conceived by hip-hop star and lyrical savage Pharoahe Monch, has been in the works for five years. Co-conspirators include Daru Jones, a monster on the drums best known for his work with Jack White, and guitar mercenary Marcus Machado. Both the moniker and supergroup were born out of a frustration with the veneer of American society that underestimates the darkness of white supremacy. “I knew 5 years ago where we headed,” Monch shared over the phone. “Sure, we’ve always done socially and politically aware music, but I’m tired of this “love will win” nonsense. Love may be the most powerful vibrating force, but consciousness is spreading and it’s impossible not to be more aware of the evil that has kept the world in complete darkness. TH1RT3EN is the musical personification of me and my comrades at combat.” Shot in a padded “panic” room, this Tiny Desk (home) concert reflects the rage felt by this three-man battalion of rhythm and verbal artillery, shattering genre boundaries in the process. While TH1RT3EN recorded this set in August 2020, as evidenced by Monch’s interlude, this four-song set still channels the discontent outside our windows today.